Animals naturally live their Purpose. They don’t have to think about it or measure their way to it. We humans, however…sometimes I think it’s our Purpose to find Purpose! 🙂 (Which is why we have been blessed with Free Will.) This means we have to face certain challenges that other creatures don’t. One of these is learning to deal with Time.

As you come closer and closer to discovering your Purpose, and especially once you are clear on it, you will likely find your relationship with Time shifting and changing. You may find that Time ceases to concern you. On the other hand, you may find yourself valuing it as an increasingly precious commodity.

If you fall into the latter category (as I do), here are a few tips I’ve found helpful:

2017 is going to be a pivotal year in a lot of ways. The work you do is important – whether it’s work done on the job or for self employment or “work” done while at rest or at play or at prayer. You are important. How you spend your time is important. Make the most of it! 🙂

“It is much easier to put existing resources to better use than to develop resources where they do not exist.” — George Soros

We all know social media is an incredible path to influence. But what if you could take your existing social media presence and leverage it for many times your usual impact?

My friend Karen Riordan Palmer just introduced me to an awesome tool for amplifying your social media impact if you have a compelling message you’d like to share.

I am not an affiliate of Thunderclap and have no connection with it or its developers. But I think it has tremendous potential and thought you’d like to know about it.

Thunderclap is an app that lets a message be heard when you and your friends say it together. Think of it as an “online flash mob.”
How it works is, you simply click a link to show your support by sharing a single message on your Facebook, Twitter, and/or Tumblr feed at a pre-scheduled time.
That way, instead of shares trickling out over days, they all happen at once. The message then gets amplified many hundreds of times and becomes a powerful statement that’s impossible to ignore.
It works best when you have a message that really resonates with your tribe’s core values or interests.

For instance, you could organize a Thunderclap around a charity event. Or use it to help spread the word about a lost child. Or to publicize a webinar that offers to solve a problem for your audience.

Thunderclap has a free option and several affordable paid levels starting at $45. For the free option, you set a goal for the number of supporters and if you reach it, your message gets sent at the appointed time. With the paid options, it gets sent regardless.

Her message is to spread the word about one of the largest global peace initiative events ever: the 2nd World Parliament on Spirituality that will take place this November.
The goal of the event is to create a Global Peace Initiative and Master Action Plan for Peace for the purpose of increasing the level of love, prosperity, and peace in the world.

When she first told me about it, she said they had just passed the halfway point toward their goal of having at least 100 people sign up. 51 is not a lot of people, but their estimated reach at that point was over 200,000!!

So you can see what a powerful social media leveraging tool this is.

Plus, it’s super easy for people to do.

It takes about 15 seconds and doesn’t cost a thing.

If this sounds like something you might use some day, I encourage you to support a campaign. Participating will help you remember Thunderclap as an option should you ever have an event that could benefit.

If Karen’s message resonates with you at all, test out the Thunderclap user experience for yourself by clicking her link. Share your support by clicking the red buttons on the center of the page. (You’ll also be helping her reach her goal, since she’s using the free version of the app; as of yesterday she still was a few supporters short.)

Or, find another campaign to support.

What do you think? Can you see yourself ever using Thunderclap to get your message out? How do you think you would use it?

Did you know that on average, a Tiger only succeeds in bringing down prey once every 10 to 20 hunting attempts?

A 5 to 10 percent success rate may seem like a pretty poor track record. But for all that, the Tiger OWNS the jungle.

Being a winner doesn’t mean you never lose. It simply means you don’t let it stop you. Actually, there’s gold in your mistakes. They can definitely show you what NOT to do next! 🙂

Anyway, whenever it feels like the odds are against you, think about Tiger and be glad you don’t have to take down a water buffalo any time you want a meal (or score a client). Chances are your odds of success are a bit better than that (and your prospects a bit less…well…hairy.)

Sometimes it’s easier to think about being relaxed than to actually relax – especially when you have work you need to get done.

Being in nature really helps me to center and ground myself. But it’s pretty hard to be out there all the time. There are times when I need my nature fix but just can’t leave my desk.

It used to really stress me out, but one day I discovered that just listening to the sounds of nature while I work is an instant de-stresser.

There’s a guy on YouTube named Johnny Lawson who posts a bunch of nature sounds videos. They really help me chillax into my day! Try it sometime when you have a lot to get done – perhaps they’ll help you, too.

Here’s one of my favorites:

“Loving myself heals my life. Treating myself firmly but gently nourishes my mind, body and soul!”

If you want to fix your business or heal your life, start first with loving yourself. Your own loving attitude is like the warm rays of the sun that allow your soul to grow.

Sometimes it’s hard to feel loving towards ourselves, especially when we let ourselves down. It can help to think of yourself as a very small child, just learning how the world works.

If a very young child falls on her face, do you beat up on her for her mistake?

Of course not! You comfort her and set her back on the ground to try again. And you trust that she will learn to walk and then to run. Sometimes the act of falling is just what she needs to help her learn!

Stop beating up on yourself. If you fall down, brush yourself off, give yourself a hug, and set yourself down again in the right direction to take the next step towards the Light.

You’ll be amazed at the changes that can happen in your life and business just from making this one simple shift!

Born in the slums. Abandoned by his father. His mother forced into prostitution. Grew up in unspeakable poverty and crushing racial bigotry. Nobody knows the trouble he’s seen…

He must simply have kept his eye on the Light, and not looked down. Focusing on the wonderful things in this world, and walking on the sunny side of the street….

(Not to mention talking to the animals…) 😉

This man truly understood that when you’re smiling, the whole world smiles with you.

If you haven’t yet figured out who this is, click on his picture below to hear a recording of his that is beloved all over this wonderful world:

The other day for some reason the topic of washing machines came up. I mentioned to my husband that I really like the one we have now because it sings a cheery little tune when the wash is done.

He laughed, but I insisted that it does make a difference. Our old one would let out a loud “BLAAAT!” at the end of the cycle. And my reaction was always, “Oh, no, the wash is done, now I have to go deal with it.”

Little things can have big impact.

Do little things like that matter in business, too? You bet they do!

Little things like being put on hold, the quality of the hold music, whether a receptionist smiles or frowns when you come in the door, the smell of a waiting room, how easy an invoice is to read and pay… they all affect a client’s experience.  Sometimes it’s the little things that win or lose the deal.

Pay attention today to the little things in your life, and in your business. Notice how they affect you and/or your clients, either positively or negatively. If the latter, how hard would they be to change?

Today’s Affirmation:
“I am thankful for all the wealth that comes to me every day.”

Just take a moment and do a mental wealth count.

Just the little stuff. The food in your fridge. The pictures on your wall. The clothes on your back, and in your closet.

Most of us are insanely wealthy by world standards.

With that in mind, from today onward, I’ve decided to consider myself wealthy. That doesn’t mean I have to spend needlessly or drive a new Ferrari. It’s just a matter of attitude, and of gratitude.  Concentrating on the blessings I have, instead of the ones I don’t.

I’m going to see where it takes me. Want to come along? 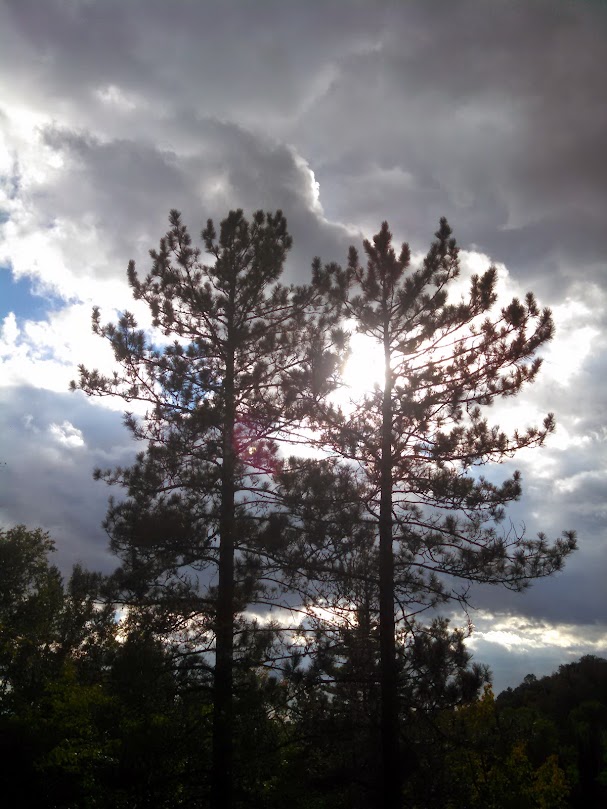 (I first published this post on another blog in 2014. Someone brought it to my attention recently and it seemed right to re-publish it here, now.)

When trees speak, their message is not so much heard as felt.

I felt them speaking to me, their voices percolating inward, cresting my consciousness as I approached the top of the ridge.

The day was gray and moist. Tiny droplets settled on my face, on my hair, collecting, commingling, until finally they gathered enough collective momentum to run in tiny streams over my lips, my cheeks, my brow.

The message of the trees emerged.

“You are trying too hard,” they said.

It was not a whisper.

“You don’t have to try to solve the problems of the world. Just be who you are and you will make a difference. All you have to do is be.”

Be yourself? Is that what they were telling me?

Who knew trees spoke in cliches?

But who am I to argue?

Take a moment to listen to the trees today. What are they saying to you? What difference will you let it make in your life?

Serving clients in the following sectors: